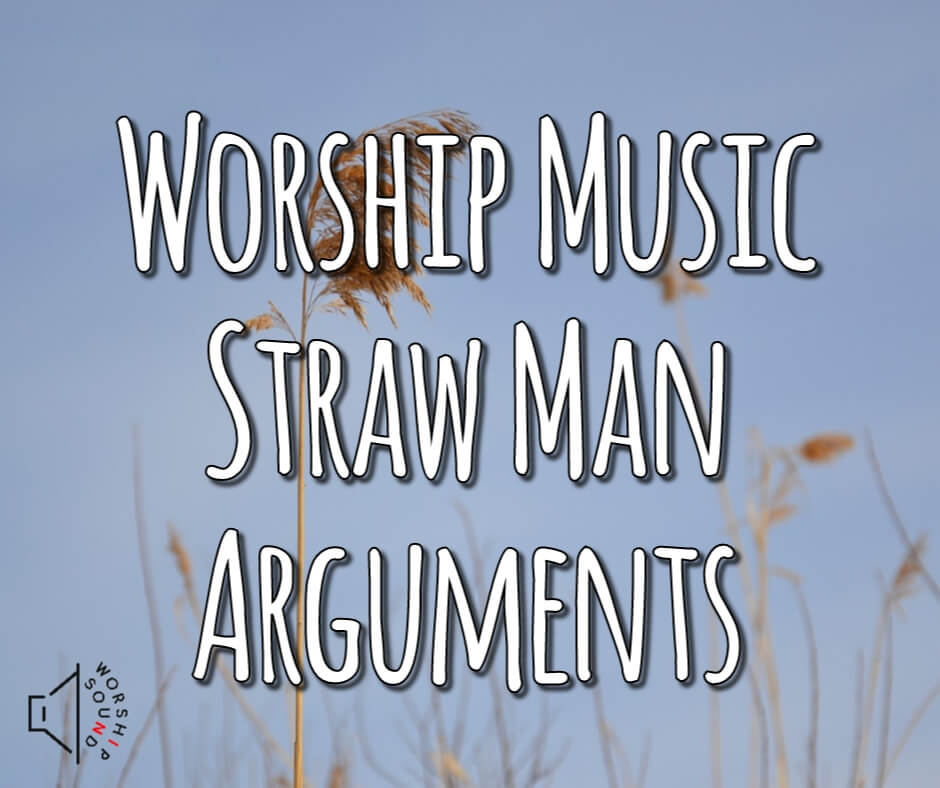 Oxford Reference describes a straw man arguments in this way:

The worship music topic is no stranger to these kinds of arguments. I believe it's a reason that worship music continues to head down the path it's been on for many years now. As straw man arguments are popular in our postmodern world, arguments against discerning worship often music bring them out. Let's take a look at some of the popular ones.

I guess you think only perfect people can make worship music.

Nevertheless, 1 John 1 warns about those who say they have no sin, and Bible-believing Christians wholeheartedly believe 1 John 1. The reality is, everyone knows that every worship artist is a sinner, just as we are. The truth that is avoided is this: not everything with a "Christian" label is Christian.

Also, you won't find a serious brother or sister who claims to be the "arbiter of truth" on the worship music matter. It's just that there's a difference between carefully choosing worship songs and throwing discernment out the window.

People misuse "do not judge" for everything, and the worship music topic is no exception. They cite Matthew 7 and then assume that anyone who speaks out about worship music has a "plank in their eye". The truth is, we all have areas of our lives that are not "maxed out" in sanctification. Christians will continue being sanctified until death.

It's certain that we must live lives that are set apart. Christians should be pursuing holiness and growth in sanctification, but imperfect Christians are still able to speak the truth. That's because the only kind of Christian in this world is an imperfect one. It's true that not everyone should offer guidance on every matter, but that does not mean that no one should point out false teaching at any time.

If we're waiting on only those who commit zero sins to speak, we'll never hear correction or sound preaching, because we won't hear preaching at all. There's a difference between being a sinner who repents and grows in sanctification and someone who is unregenerate. "Do not judge" is often used as more of a tool to try to divert a solid argument.

There are plenty of hymns with bad theology.

You'll likely never meet a soul who believes every hymn is 100% biblically accurate. Yet, people still use this straw man argument when many modern songs are criticized. The truth is, discerning Christians know that a solid worship song could be written at any time.

If you're worried about funding certain ministries, I guess you can't shop anywhere that's not Christian either.

This argument tries to equate the world and the church. It attempts to put the common actions of buying groceries, clothing, and other everyday items on the same level as what happens in a church service. It assumes that components of a worship service, such as communion, preaching of the Word, singing worship music, etc., are no different than choosing a fast-food restaurant.

The truth is, a worship service with the set-apart members of a local church is completely different from walking into your local grocery store. Churches carefully choose which ministries they fund, as they should. What makes funding worship music ministries (via CCLI, free advertising) any different?

As in all conversations with those who disagree with you, be gentle and respectful when discussing this topic. Angrily accusing someone of making these arguments is not a helpful or efficient way to go about it. Explain the straw man argument away, and head back to the actual disagreements in this matter. There are plenty of those...