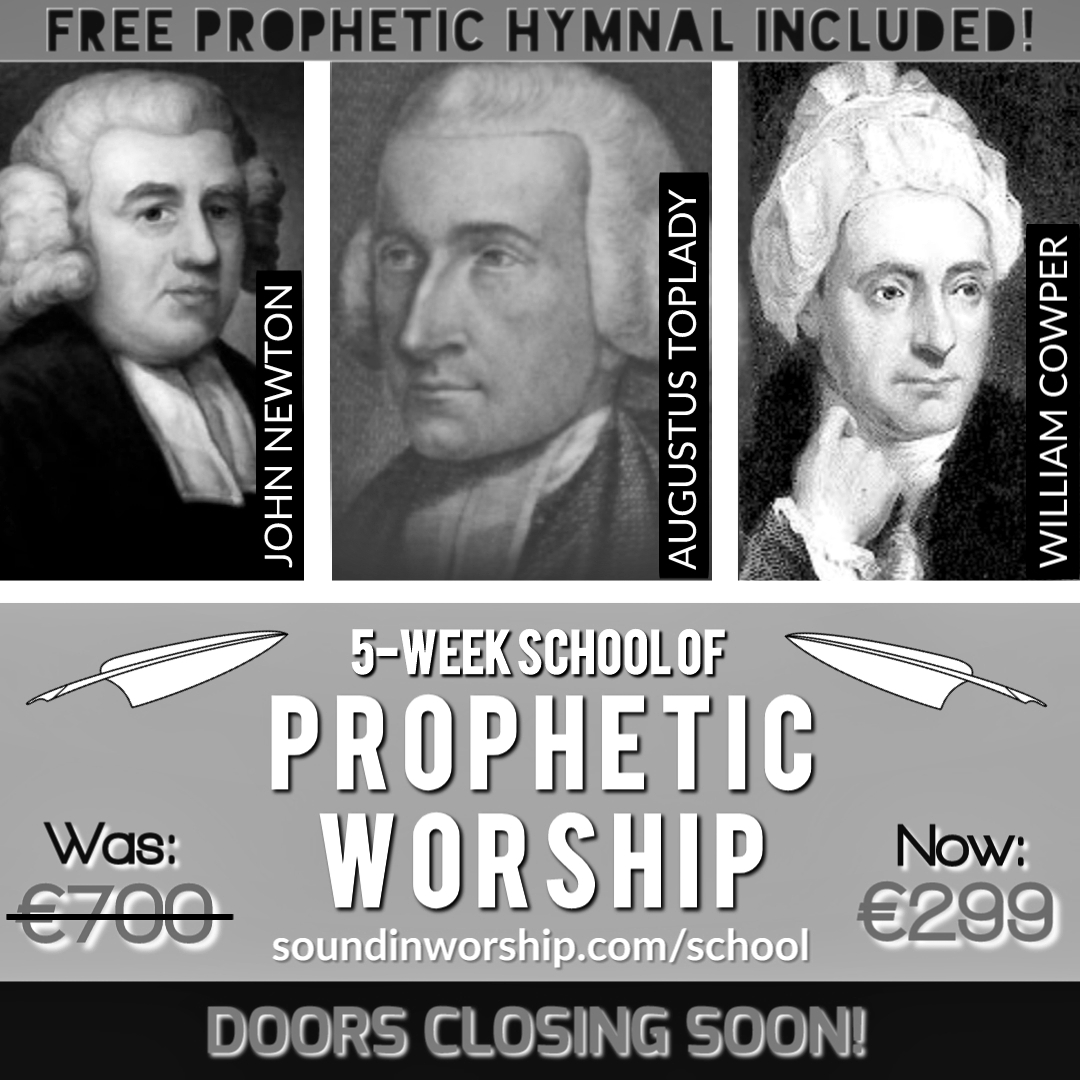 Join the experts in prophetic worship.

The five-week-long School of Prophetic Worship is an anointed program led by three of the greatest hymn writers of our time. Join John Newton, Augustus Toplady, and William Cowper as they show you the simple steps you need to take to become the prophetic worshipper you were born to be.


No matter who you are, you were called for this moment. It’s time to step in!


You may know these three prolific writers for their hits titled “Amazing Grace”, “Rock of Ages”, and “There is a Fountain Filled with Blood”. However, the lyrics of those songs are only a small fraction of their work.


In this five-week school, our speakers are going to share their techniques on cultivating a culture of lyrical spaces that allow the prophetic to break through into reality. This is the true passion that these hymn writers have grounded themselves in.


Included in this program is a free copy of the 18th Century edition of the Prophetic Hymnal. This excellent hymnal (valued at £379) is included in the cost of tuition and is packed full of hymns that were written to usher in tongues of strange fire that turn each and every congregant into a prophet instantly (even when the third stanza is omitted). 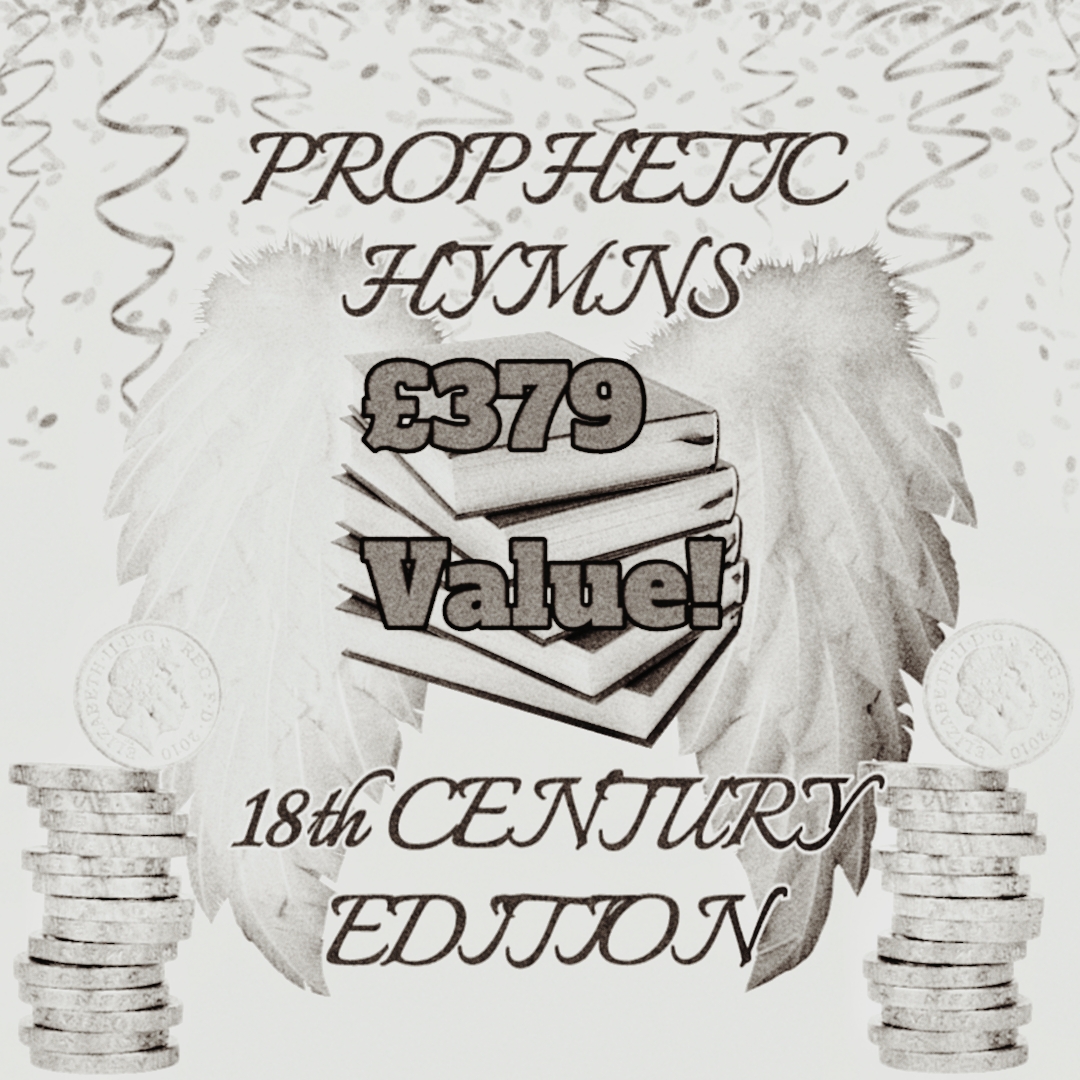 What other hymnal could one need?

You might be wondering how to know for sure that you’re going to get your money’s worth out of this program. Just take a look at a few of the excerpts below from past sessions: 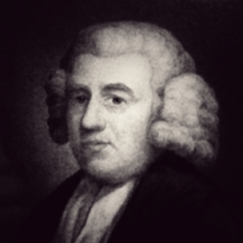 "A lot of folks know me for my hymn ‘Amazing Grace’, and pastors all over the world use that hymn to reference the sinful wretches we all are and our need of repenting and believing in the Lord Jesus Christ for salvation. For this school, forget all of that! You do not want to ruin the place of the prophetic by making congregants feel convicted of their sins.


We’re here to break down strongholds! We’re here to create music that shapes the culture and welcomes the violent body shaking of fire tunnels. Repeat after me: 'the place of prophetic worship!' This is the place that you will step into and bring others with you. This is what it’s all about."


That was just a glimpse of John’s past session. Check out what Augustus Toplady brings to this program:

"My focus in this program is on setting the mood and scene for prophetic worship. There are a couple of requirements for ensuring the scene is just right. The first one is the lighting of the Sanctuary. When I wrote ‘Rock of Ages’ with its message on hiding in the cleft of the rock, don’t think for one second that I meant anything about being humbled by the glory of God and hiding in Him. Lighting, folks.


Where you might have every candle and torch burning to the fullest extent when the pastor approaches the pulpit, you MUST blow out at least half of those for the worship music portion. In fact, this works best when you can barely see your neighbor at all. On that note, the other requirement is that fog must be very prevalent in the Sanctuary.


Realizing that it is difficult to get fog into the Sanctuary, your tech team needs to prepare approximately 17 pots of boiling hot water right in front of the stage. The steam from those pots will portray a misty fog that will also serve as a humidifier. When those candle-lit rays of light hit that steam you can be sure that you have set up a scene that is perfect for ushering in the prophetic."


And what is prophetic worship without prophecy? William Cowper gives a glimpse of what this looks like from last year’s program: 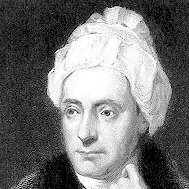 "A movement will spring forth in about 250 years, and it will become powerful in the western part of that new nation called the United Colonies (if that whole thing pans out...doubtful). A substance that appears to be gold glitter will fall from the ceiling of a church led by an Apostle named Bill. They will call it a glory cloud. His church will pretty much produce all of the Christian music of that day, but others will elevate from the hills of Carolina and Australia.


A small group will try to ensure worship music is biblical and full of truth, but the majority of young Christians will ignore them and use only the most popular music of the day. That small group will be told to stop over and over again because of tons of unverified experiences that do not align with what Scripture teaches.


‘Discernment’ will be seen as a negative word that shouldn’t even be spoken. One man named Peters, I think his first name is Justin, will stand up against those that sell prophetic worship training guides in this day, and his words will have a great impact. He will call these groups to repent, believing that God can bring anyone He desires to repentance. I can see no further than this. Maybe one more song and I’ll get the rest of the prophecy."


We’ll have to wait about 250 years or so to see if this prophecy comes true, but how important is accuracy anyways?


It may seem like the choice is obvious, and I'm sure you're asking yourself: "how many pounds sterling will you accept to grant me entry into the five-week School of Prophetic Worship?"


Friend, there has never been a greater time to become the courageous worshipper you were called to be!


Please share this article so that no Christian misses out on this incredible opportunity. The doors to sign up are closing soon!


There is also a playlist you should avoid like the plague because it doesn’t contain a single prophetic worship song in it. Shameful!


While we're at it, I would definitely avoid this episode of the Sound in Worship podcast that covers the actual article this is in response to:


Read More From Sound in Worship