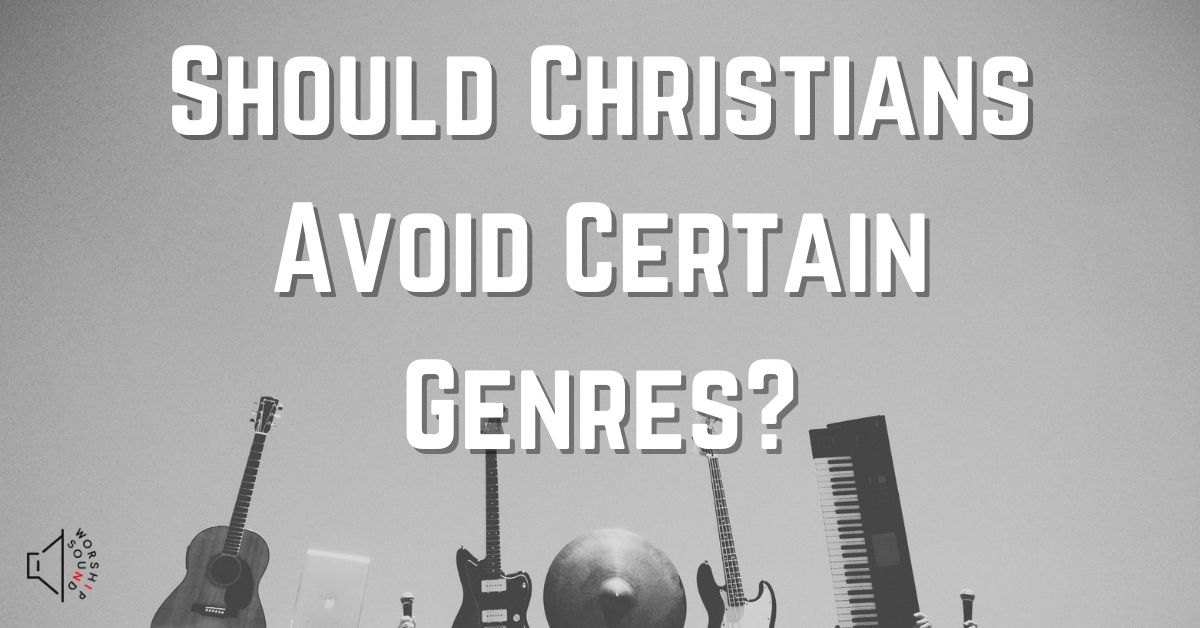 Christians seem to have different stances when it comes to this question. The question is asked in these kinds of forms:


In my own encounters with this kind of question in public forums, many seem to be passionate about their own stance. In this article, I will give my own stance, in which I intend to appeal to Scripture. If we base this on feelings or opinions we will end up with a meaningless answer.

What is a Genre?

a category of artistic, musical, or literary composition characterized by a particular style, form, or content.

Being that this is Sound in Worship, we'll be looking at the musical genres only. The next big question is:

How do we determine the genre of a song?

The answer to this question carries a lot of weight when deciding if certain genres should be avoided by Christians. We cannot know which genres to avoid if we cannot assign genres to songs. So, if Christians should avoid certain genres, one would need to be able to say, "avoid that song because it's in the [insert genre here] genre."

We would also need a way to know which genres are right and wrong for Christians. As in all matters of morality, the word of God is where Christians go. It is God who sets the standards of right and wrong, and He has revealed His word to us.

Hebrews 5:14 tells us that the mature have their powers of discernment trained by constant practice to distinguish good from evil. If we are able to distinguish "good" genres from "evil" genres, we will need to be able to back up our arguments with God's word.

So, we'll need to know which genre a song or album is and to know if the genre is objectively "good" or "evil". This leads to the next question:

Are Music Genres Objective or Subjective?

First off, truth is objective. It is important to make that distinction in this postmodern age. The question we are setting out to answer needs truth in order to be answered.

When it comes to genres, which are used for categorization, it can be difficult to pinpoint the exact genre of a song. You may have an artist who declares that he is making music of a certain genre. When that artist makes that claim he is setting out to let consumers of his music know what he intends the genre to be. When submitting a song to streaming platforms, you will be asked to select a primary and secondary genre (if you’ve done this you know how difficult it can be to choose).

At the very least, we can know which genres an artist is intending to make music in. A key point to consider is that the artist may not be able to categorize his music to the fullest extent via genres. He may be using a blend of several genres. Consumers may even disagree with the artist on which genre or genres he is claiming to create within.

With that said, it's hard to build a good argument for genres being objective. Genres certainly give meaning and help us categorize music. Genres are helpful but limited. They're subjective in that they cannot always fully describe a particular song or album.

If you could claim a song or album was objectively a certain genre, what would it take to do that? For example, would we determine that a song was a "rock" song because of a certain level of distortion on the guitars? How many seconds of the song would need to contain an electric guitar? Do you see the issue?

Listen to these clips and try to give them one or two genres:

Which genre was that?

Which genre was that?

And... which genre was that?

Believe it or not, these were all clips from the song “Forsaken Me (Psalm 22)” by an outstanding group that creates music on the Psalms called My Soul Among Lions. They describe their music as “Psalms go folk”. That makes sense when listening to their work, but within even just one song you can see the different genres and subgenres. The song has great lyrics (obviously) and the instruments are played skillfully. It is a great song, but ask yourself an honest question: can one safely assign a universally true genre to it? If so, how? How is one able to determine exactly which genre it is other than knowing what the artist intended to do?

Hundreds of people could listen to the same song and describe it with several different genres. Those descriptions would be helpful, but they would likely contradict in many ways. This makes it challenging to distinguish between "good" and "evil" genres.

It is difficult, but not completely impossible. For instance, we can know the "Acid Rock" genre, in its most basic sense, is objectively evil. "Acid" refers to the drug LSD (lysergic acid diethylamide). According to definitions.net, Acid Rock is a rock music genre originating from the late 1960s, heavily inspired by or related to drug-induced experience.

We can say that someone who is setting out to create Acid Rock is doing something that is evil. He is creating evil music. See Galatians 5:20 for context. From the MacArthur Study Bible on “sorcery”:

The Greek word pharmakeia, from which the English word “pharmacy” comes, originally referred to medicines in general, but eventually only to mood- and mind-altering drugs, as well as the occult, witchcraft, and magic. Many pagan religious practices required the use of these drugs to aid in the communication with deities.

We can say, with certainty, that Christians should not set out to create Acid Rock. This argumentation could be applied to other genres or subgenres. Notice the term "set out". This implies a person's motives. This argument could only apply to someone who is openly setting out to create music in this genre.

Although this is a frequent argument, it is a weak one. What makes this argument weak is its reliance on personal preferences rather than truth.

For instance, as a music mixer, I can attest to the many effective uses of distortion. Many use subtle distortion on vocals to help set the vocals "on top" of the mix. In other words, distortion can help the consumer of music hear the vocals more clearly. It has a literal effect on the audio waves.

One might hear a song that contains an electric guitar that has a slight distortion effect on it and say "that almost sounds like Acid Rock". The artist may not even know what Acid Rock is. The truth is, the style that the artist is playing could be considered several different genres as covered above.

In other words, it would be very difficult to form a solid argument on declaring songs as evil based on hearing their style. A better argument, which is often available, would require knowing what kind of music an artist is setting out to create.

If a Christian was setting out to create "Christian Acid Rock" (which was uncomfortable to type but necessary for the point), we would know that he is setting out to unnecessarily combine an evil genre with music for Christians. We could confidently say that this shouldn't be done.

Does this apply to genres that we do not enjoy, yet are not inherently linked to sin? It would be tough to make that argument based on musical style alone. It is more about what intention the artist has in making the music. Again, it's important to remember that musical styles cross many genres.

What About Certain Frequencies?

I have no doubt heard the argument that certain genres use certain frequencies that have an effect on the listener. The argument sometimes claims that New Age practices include listening to a certain frequency for evil purposes. This claim is true, but this has no impact at all on the frequencies in and of themselves.

Below is a picture of a frequency graph by Waves of which I recorded myself saying the word “grace”. Notice how all frequencies are represented across the entire graph? Now imagine instruments like the piano and how easily it would reach each frequency more often over just a few seconds. 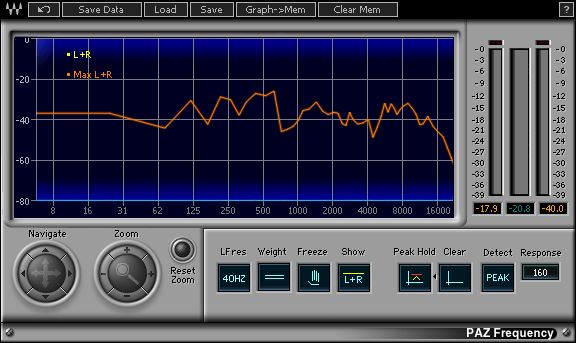 It comes back to motive. If someone creates music from a genre for New Age worship, that genre is an evil genre, but poor discernment leads us to believe we can avoid certain audio frequencies in all contexts. The Bible certainly does not instruct us to avoid certain frequencies (for obvious reasons).

Styles of Music Used in the Bible

Have you heard music from the Bible? To expound, have you literally heard the music that was played 2,000+ years ago by those in the Old or New Testament? You have not. In other words, the Book of Psalms does not come with inspired sheet music. We do see songs of praise, lament, etc., and those can help us get an idea of the mood of the song.

Of course, you've heard the psalms from the Book of Psalms (translated into English) sang. You've heard great worship songs that are based heavily and directly on the psalms, but you have never heard exactly how these songs were performed originally.

Historians can look into what instruments were used. Psalm 150:3-5 mentions specific instruments that were used. One could assume what these psalms sounded like when performed, but we cannot know with as much detail as we could if we heard for ourselves.

It would be one thing if God instructed us to avoid certain instruments. Then we would know that any genre that requires those instruments should be avoided. Gotquestions.org covers this topic:

Since certain instruments are not forbidden and certain styles are not explicitly forbidden, we should be slow to say that certain genres are forbidden based on their sound alone. The word of God is our standard. "I don't like how that sounds" is not a very strong argument.

We can safely say that worship music in a church setting should not use every single genre known to man. Music that distracts from the lyrics being proclaimed or music that makes it difficult for the congregation to sing along with should be avoided in my opinion.

The nature of this article is more geared toward “worship music” that is not for a church service. I'm referring to songs that accurately describe and praise our Lord Jesus Christ but are not songs that a congregation could sing together. These are songs listened to or performed outside of the church.

It is obvious that Christians shouldn't listen to music that makes a mockery of God's word or promotes sin. This certainly happens, or has the ability to happen, in any and all genres (even contemporary worship music). While truth is objective, musical genres are not fully so. They are not intended to be set in stone. Rather, they are used for helpful categorization.

One might make a slightly better argument than the "I don't like how it sounds" argument by claiming that genres with bad origins should be avoided. That is at least a respectful argument. The problem I find with it goes back to categorization. It is difficult to pinpoint genres, and it is probably more difficult today than ever.

One last thing to keep in mind is that we should ask God to lead us to the music we should listen to. It is certain that we shouldn't listen to just any music under the sun. We should seek to discern what is evil and what is good (Hebrew 5:14). We should follow God's word over any other written word.