Worship Leader Explains Problems With Each Song:
Before Leading Them 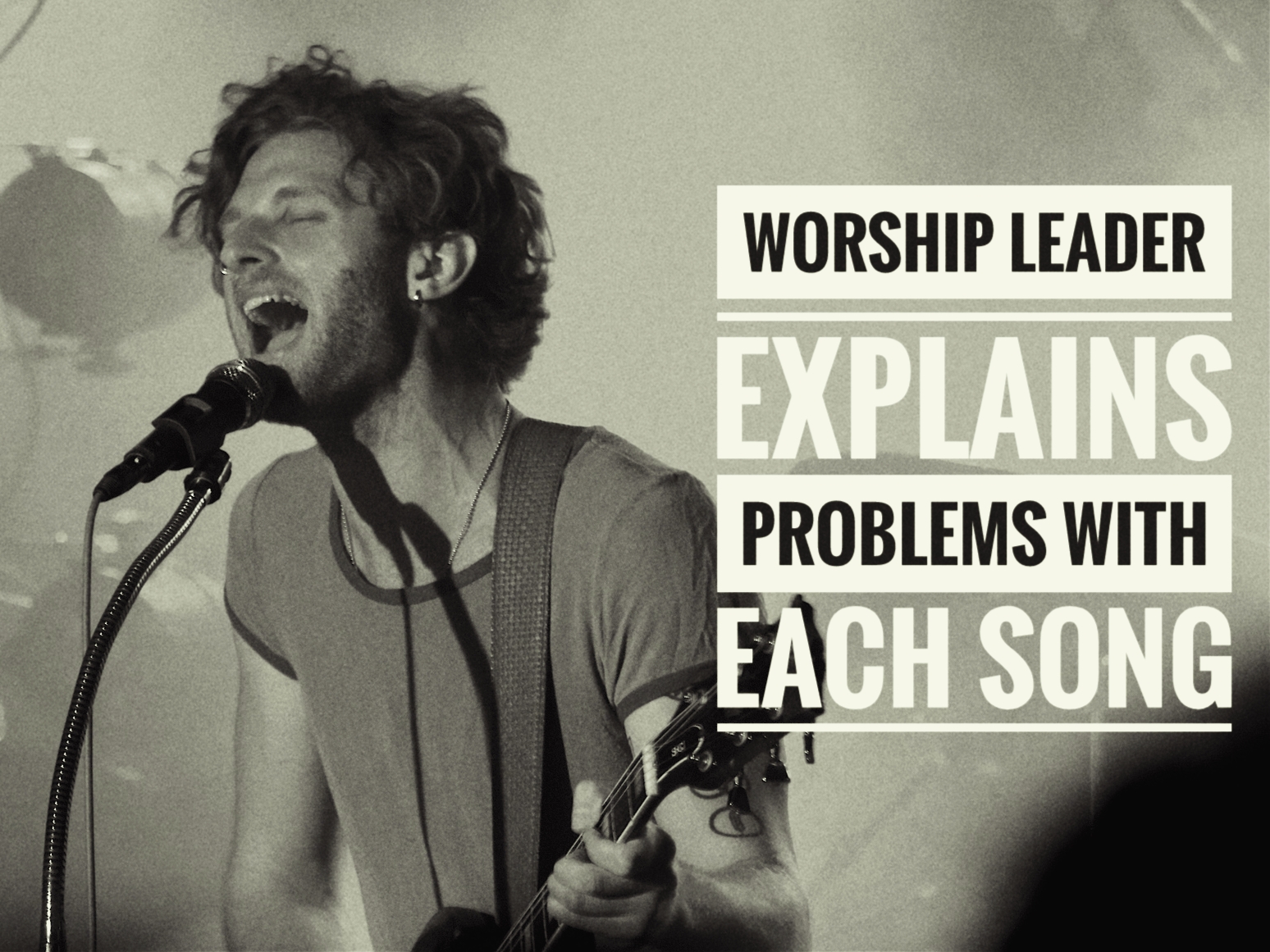 Our own Silas Scott recently obtained a bulletin from the largest protestant church in the Nashville metro area. In that bulletin was a story that we here at Sound in Worship felt we had to pass along.


Ned Anderson, worship leader at Faith Fellowship Church in Nashville, was the center of attention in an article found on the last page of the bulletin. The article was titled "Ned Explains Each Song" by Pastor Roger Selby.


We here at Faith Fellowship are extremely proud of brother Ned Anderson. Last week, he took it upon himself to explain the issues with the songs we were set to sing this week for our worship service. It was truly an edifying experience for our congregation.


As Ned started strumming his acoustic guitar, he took some time to explain some of the issues with the first song on our praise setlist. He explained, "Now, on this first song, brothers and sisters, we're singing a song by Walls Fall Worship. They're known for their church members falling out on the floor and violently shaking at around the nine-minute mark of this song. While we will be reporting this song to CCLI, thus funding that ministry, we're all just here to lift up our voices in praise! Just don't look up their content later on! Let's give a hearty shout on high in this song called 'You Shake Me'!"


I thought Ned really set the tone on that song and prepared the hearts of all of our congregation for worship. Ned didn't stop there though. For the next song, I noted that he said, "Whew! Is everyone feeling that emotion!? It's in the atmosphere this morning!

For this next song, Pastor Roger wanted to be sure that we disregarded the lyric that says 'when I open up my mouth, miracles start breaking out'.

Fam, the reason we're going to overlook that line is that our dear pastor's sermon today teaches that we are not able to casually speak miracles into existence, and that we should focus on following Christ whether we see a sign or not.

Alright! Let's sing like we normally do and overlook that line! Let's lift up our voices again!"


By that time, our members and attenders were incredibly encouraged. You could see it on their faces. I was prepared to preach a sermon on Matthew 16. I was thankful to know that there wouldn't be any confusion between my sermon and the lyrics of the songs we were singing. Everyone loves those songs!


The last thing he did was explain the special he was going to sing. He said, "You all can be seated. I wanted to sing a song this week that I have been practicing for two days now. The vocals are way too difficult for you to join in and sing along, so just listen to me sing this song of praise. If you feel like singing along, you can try, but you likely won't be able to hit some of these notes. I'm gonna praise now."


Those comments really showed Ned's maturity. He didn't want the congregation to embarrass themselves so he let them know that they could just listen to him sing a song of adoration. Ned humbles me, and I know that he humbled each and every person that attended this week.


Aren't you glad to know what's going on at Faith Fellowship?


In the event that you would rather sing songs with lyrics that do not battle biblically exegeted sermons, you could check out our commentary resource to find biblically sound worship songs. It is also a way to find songs that churches can avoid if they come up.


There is also a playlist filled with worship songs, both congregational and personal, that glorify the Lord with true lyrics. It's also updated frequently.


Or, you could just continue to support every worship music-creating ministry under the sun without looking into what the ministry believes and teaches. This is popular if you're only focused on singing the most popular worship songs, whether they make sense or not.


You can listen to a podcast on this article:


Read More From Sound in Worship